A tender journey into the broken heart of Australia.

For a few wonderful months in 1989, I lived in a tree in Western Australia. I spent my days trying to paint the outback and searching for gold.  Of course I didn’t find any gold and the less said about my artistic efforts the better. But my time there fostered an interest in nature, science and history. When I returned to Ireland, I studied natural science in Trinity and graduated with a degree in Geology in 1995. 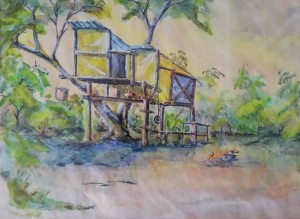 Occasionally, when living at the treehouse, I would drive the seventy kilometres to the Ora Banda Inn and General Store for supplies and refreshments. Some years later, I went back to the area to work as a geologist and discovered the Ora Banda Inn a burnt-out shell. The story of Ora Banda and my own experiences working on a nearby sheep station and later in the gold and iron ore industries in Western Australia, have inspired and informed my debut novel, Magpie.

Jim Macken lives alone in a tree. The reserved Irish backpacker has gone walkabout and fallen for the harsh beauty, and decaying history of the scorched West Australian Outback. There is always the possibility of finding gold.

After a rough night on a trip to the remote Aurora Inn, Jim sleeps across the wide front seat of a beat up old Ford. Outside the cab, the township is in flames. A body lies in the dirt. Jim does not know his idyllic time at the treehouse has ended or that his life and that of Kelly Porcini, the disillusioned barmaid, would be violently thrown together. The evidence, much of it manufactured, suggests Jim is a killer and Kelly an accessory.

Hunted by landlord and former police chief Max Collins, for murders they did not commit, Jim and Kelly flee on a pell-mell flight deep into the hostile interior of the continent. They have proof of Collins’s guilt, but this proof must not fall into the hands of Collins’s corrupt former associates. Jim and Kelly have good reason to fear for their lives as Collins attempts to conceal his criminal past.

Along the way the young couple find love and a country almost broken by drought, substance abuse, misogyny and racism, but inhabited by many good people and the occasional character. Ultimately, an ancient and indigenous Dreamtime landscape will decide how their story ends.

Magpie is a tender journey into the broken heart of Australia. It strives to capture the atmosphere and sense of an extraordinary place.

“… a strong opening, with superb atmosphere and sense of place. The opening scene was unusual and absorbing. Although narrated in a relaxed pace, the voice keeps the reader engaged through details. Equally, while description dominates, the structure is varied and stylistically confident. The dialogue is vivid and characters seem to be introduced effortlessly.”

Available from the retailers below.

Bookshops and libraries can order Magpie direct from Ingram.